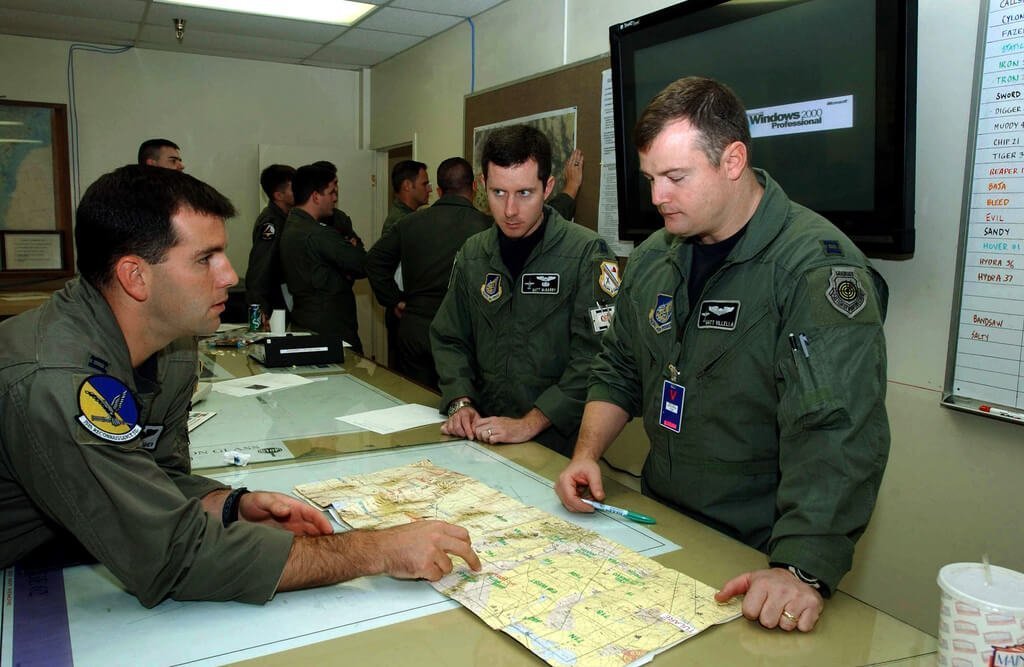 Exercise Red Flag is a two-week advanced aerial combat training exercise held several times a year by the United States Air Force. The purpose is to offer realistic air-combat training for military pilots and other flight crew members from the U.S., NATO and other allied countries.

Red Flag exercises are conducted under the aegis of the United States Air Force Warfare Center (USAFWC) at Nellis. They are run by the 414th Combat Training Squadron (414 CTS) of the 57th Wing (57 WG). They use “enemy” hardware and live ammunition for bombing exercises within the adjacent Nevada Test and Training Range (NTTR).

The mission of the 414 CTS is to maximize the combat readiness and survivability of participants by providing a realistic training environment and a pre-flight and post-flight training forum that encourages a free exchange of ideas. To accomplish this, combat units from the United States and its allied countries engage in realistic combat training scenarios carefully conducted within the Nellis Range Complex. The Nellis Range complex is located northwest of Las Vegas and covers an area of 60 nautical miles (111 km) by 100 nautical miles (190 km), about half the area of Switzerland. This space allows the exercises to be on a very large scale.

In 1998 the RFMDS in turn was replaced by NACTS (Nellis Air Combat Training System), which increased precision and range as well as the amount of available data and supported aircraft.

Before a “flag” begins, the Red Flag staff conducts a planning conference where unit representatives and planning staff members develop the size and scope of their participation. All aspects of the exercise, including billeting of personnel, transportation to Nellis AFB, range coordination, ordnance/munitions scheduling, and development of training scenarios, are designed to be as realistic as possible, fully exercising each participating unit’s capabilities and objectives.

The origin of Red Flag was the unacceptable performance of U.S. Air Force fighter pilots and weapon systems officers (WSO) in air combat maneuvering (ACM) (air-to-air combat) during the Vietnam War in comparison to previous wars.

Air combat over North Vietnam between 1965 and 1973 led to an overall exchange ratio (ratio of enemy aircraft shot down to the number of own aircraft lost to enemy fighters) of 2.2:1 (for a period of time in June and July 1972 during Operation Linebacker the ratio was less than 1:1).

Among the several factors resulting in this disparity was a lack of realistic ACM training. USAF pilots and WSOs of the late 1950s, 1960s and early 1970s were not versed in the core values and basics of ACM due to the belief that BVR (Beyond Visual Range) missile engagements and equipment made “close-in” maneuvering in air combat obsolete. As a result of this BVR-only mindset that reached its zenith in the early 1960s, nearly all USAF fighter pilots and WSO of the period were unpracticed in maneuvering against dissimilar aircraft because of a concurrent Air Force emphasis on flying safety.

An Air Force analysis known as Project Red Baron II showed that a pilot’s chances of survival in combat dramatically increased after he had completed 10 combat missions. As a result, Red Flag was created in 1975 to offer USAF pilots and weapon systems officers the opportunity to fly 10 realistically simulated combat missions in a safe training environment with measurable results. Many U.S. air crews had also fallen victim to SAMs during the Vietnam War and Red Flag exercises provided pilots and WSOs experience in this regime as well.

At Nellis, Suter was well-known and well-liked. The first Red Flag exercise was conducted on Gen Dixon’s schedule in November 1975. On 1 March 1976, the 4440th Tactical Fighter Training Group (Red Flag) was chartered with Col P.J. White as the first commander, Lt Col Marty Mahrt as vice commander, and Lt Col David Burner as Director of Operations. This small crew under Col White’s leadership undertook the task of firmly establishing the program.

The “aggressor squadrons”, the opponents who flew against the pilots undergoing training, were selected from the top fighter pilots in the U.S. Air Force. These pilots were trained to fly according to the tactical doctrines of the Soviet Union and other enemies of the period, in order to better simulate what then-TAC, as well as USAFE, PACAF and other NATO pilots and WSOs would likely encounter in real combat against a Warsaw Pact or other Soviet-proxy adversary. The aggressors were originally equipped with readily available T-38 Talon aircraft to simulate MiG-21, the T-38 being similar in terms of size and performance. F-5 Tiger II fighters, painted in color schemes commonly found on Soviet aircraft, were added shortly thereafter and became the mainstay until the F-16 was introduced.

Today, the 414th Combat Training Squadron (414 CTS) is the unit currently tasked with running Red Flag exercises, while the 64th Aggressor Squadron (64 AGRS) also based at Nellis AFB uses F-16 aircraft to emulate the MiG-29 Fulcrum. These aircraft continue to be painted in the various camouflage schemes of potential adversaries. An additional squadron at Nellis, the 65th Aggressor Squadron (65 AGRS), operated F-15 aircraft in various camouflage schemes of potential adversaries to replicate Su-27 Flanker and Su-35 Flanker threats. However, the 65 AGRS was inactivated on 26 September 2014 due to Fiscal Year 2015 budget constraints imposed upon the Air Force that zero-lined the squadron’s budget.

The U.S. Navy operates a similar large-force training exercise known as Air Wing Fallon at NAS Fallon and the Fallon Range Training Complex in northern Nevada. Air Wing Fallon is a month long evolution designed to enhance a carrier air wing’s war-fighting ability in both the air-to-air and air-to-ground arenas, with the primary focus being for the air wing to become familiar with the complexity of a large force strike (LFS). Previously under the aegis of “Strike University” (STRIKE U), an O-6 level command when it was formed in 1984, STRIKE U was later merged with the fighter community’s TOPGUN and the carrier airborne early warning community’s TOPDOME following those organization’s 1993 BRAC-directed relocation from the former NAS Miramar, California, forming the Naval Strike and Air Warfare Center (NSAWC) under the command of a naval aviation flag officer at NAS Fallon in July 1996. NSAWC then became the executive agent for Air Wing Fallon. In the 2010s, NSAWC incorporated the electronic attack community’s HAVOC directorate, and in 2016, NSAWC was re-designated as the Naval Aviation Warfighting Development Center (NAWDC).[9] The Commander of NAWDC at NAS Fallon, the Commander of USAFWC at Nellis AFB, and their respective subordinate units and staffs maintain regular rapport with each other in areas of shared equities and the tactical development of the Joint Force.

Red Flag and Air Wing Fallon should not be confused with smaller, but longer duration, programs that the USAF and USN run to train individual weapons and tactics instructors. In 2009, the 416th Flight Test Squadron from Edwards AFB, California, participated in Red Flag as well, the first time an Air Force Material Command (AFMC) unit had been part of the program.

Only countries considered friendly towards the United States take part in Red Flag exercises. So far, the countries to have participated in these exercises are:

If you’d love the opportunity to fly an aircraft in a Red Flag exercise and you’re not a military pilot who’s qualified to attend, then your next-best option is to fly in DCS (Digital Combat Simulator, by Eagle Dynamics).

The below campaigns are all built around Red Flag exercises and currently accommodate 4 different aircraft:

The M-2000C Red Flag Campaign is a story-driven campaign that takes place during an extraordinary Red Flag exercise at the Nevada Test and Training Range (NTTR). The campaign backstory revolves around growing hostilities between Iran and its neighbors and a partially successful coup that takes place in the United Arab Emirates, effectively splitting the country in two.

You will take on the role of a deputy commander of a 10-ship strong detachment of M-2000C interceptors from the 02.005 Fighter Squadron “Île-de-France”. In preparation for war in the Persian Gulf, your detachment, and those from the United States, Germany, the United Kingdom, Poland and the Netherlands, will spend two weeks at the NTTR to hone your skills.

All of the missions are based on extensive research of actual Red Flag exercises and will each include interesting facts and stories from previous runnings of the exercise.

The AJS-37 Viggen: 16-2 Red Flag Campaign is a depiction of flying the AJS-37 Viggen during a typical Red Flag exercise in the skies over Nevada. Take the role of a US Air Force exchange pilot to the Swedish Air Force as you return to take part in a Red Flag in the cockpit of a Viggen. This campaign includes extensive briefing, map, and lineup card PDF files for each mission and was designed by the creators of the Spitfire: Epsom and Mustang: Charnwood campaigns.

All of the missions are based on input from pilots that have flown in Red Flag exercises and will provide you a challenge that will test even the most skilled virtual pilots.

The A-10C: 16-2 Red Flag Campaign is a depiction of flying the A-10C “Warthog” during a typical Red Flag exercise in the skies over Nevada. This campaign includes extensive briefing, map, and lineup card PDF files for each mission and was designed in consultation with the renowned author Steve Davies.

All of the missions are based on input from pilots that have flown in Red Flag exercises and will provide you a challenge that will test even the most skilled virtual pilots.
Features:

The F-15C 16-2 Red Flag Campaign is a depiction of flying the F-15C Eagle during a typical Red Flag exercise in the skies over Nevada. This campaign includes extensive briefing, map, and lineup card PDF files for each mission and was designed in consultation with the renowned author Steve Davies, the authority on the F-15C.

All of the missions are based on input from real F-15C pilots that have flown in Red Flag exercises and will provide you a challenge that will test even the most skilled virtual pilots.

The Nevada Test and Training Range (NTTR) has the largest contiguous air and ground space available for peacetime military operations in the free world. The NTTR land area includes simulated air defense systems, mock airbases, and several target ranges. The NTTR was also used for nuclear testing. Today, it is home to RED FLAG and other military exercises that include countries from around the world. The NTTR map for DCS World 2 includes Nellis AFB, Creech AFB and the infamous Groom Lake AFB (aka Area 51). This map also includes the city of Las Vegas, McCarran International Airport, and Hoover Dam.